The Iowa Lakes Community College Board of Trustees met Tuesday afternoon on the Algona Campus as a part of the 2018 summer tour of campuses. Tuesday’s meeting in Algona did concluded this year’s tour. 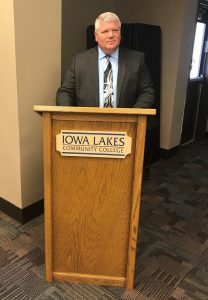 Following Waechter’s presentation, she introduced Bryan Nelson. Nelson is the instructor of the Secondary Broadcast Media program at Algona High School.  He was able to provide the board with additional information about his program including an acknowledgment of the success that two of his students had while competing at the National Skills USA competition in Louisville, Kentucky. This is the 18th straight year that the members of the Algona High School Broadcast Team have advanced to the national championships.

“This has been a unique partnership working with Iowa Lakes Community College, Algona High School, and the City of Algona. This experience is great for all involved, especially our students,” said Nelson. 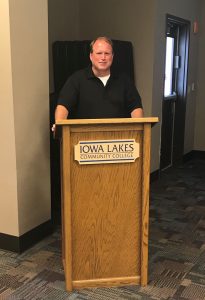 Nelson also updated the board about the opportunities available for students to enroll at Iowa Lakes with a portion of their requirements met for the Digital, Social, and Broadcast Media Specialist program located on the Estherville Campus.

Following Nelson’s presentation, the Board of Trustees approved the strategic plan for Iowa Lakes Community College, entitled, 2019-2023 – Beginning the Next 50 Years.

An additional item that was approved by the Board of Trustees includes Iowa Lakes Community College moving forward with the formal application to the Iowa Board of Education for a proposed cosmetology program on the Emmetsburg Campus.

Muller then introduced the new Executive Director of Marketing, Beth Elman. Elman introduced herself and thanked the board for the opportunity to speak. Elman went on to provide the board with general information about herself and some of the expertise that she brings to the position.

Elman stated, “I have an extensive background in marketing strategy, brand and project management, and digital advertising. I look forward to the opportunity to make a difference and to help grow Iowa Lakes Community College.”

Also during Tuesday’s meeting, Jolene Rogers, Executive Director of Community and Business Relations, provided an update to the board about the happenings that are taking place with Continuing Education and the Iowa Lakes Foundation.

Rogers was excited to talk about the implementation of the new Laker Kids Club. She explained that this is a joint venture between Iowa Lakes Athletics and the Iowa Lakes Foundation. A formal kick-off will be announced with a press release; to include registration information. She also stated that there are plans to distribute the information about the Laker Kids Club to area school districts and that there will be representation at the Back to School Bash, located on the Estherville campus.

In other news, Delaine Hiney, Executive Director of Facilities Management, reported on the various projects that are taking place throughout each of the campuses of Iowa Lakes Community College.

In conclusion of Tuesday’s meeting, Jeff Soper, Chief Financial Officer, received approval to move forward with the payment of the monthly bills.