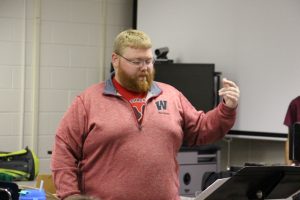 Occasionally a student comes to Iowa Lakes Community College unsure of what program or career path is right for them.

Fortunately, with more than 100 programs and areas of study, the college gives them plenty of opportunities to find their fit. Students may start in one program, but decide another is the best option and change majors.

For one alumnus, the old saying rang true — the third time’s the charm.

Ruthven native Michael Wilbur, affectionately known to everyone who meets him as just “Wilbur,” started at Iowa Lakes planning to major in vocal music education.

When he wasn’t sure that was the route he wanted to take, he changed majors to criminal justice but stayed active in the music ensembles. Realizing criminal justice wasn’t quite the right fit either, Wilbur went back to the music program — this time focusing on instrumental music.

Despite never having played it, Wilbur picked up the instrument quickly, and learned a greater appreciation for it thanks to the Iowa Lakes Reggie Schive Summer Jazz Camp where he was a camp counselor.

Throughout his time at Iowa Lakes, Wilbur remained active in all of the vocal and instrumental ensembles as well as the spring college and community musicals, playing principal roles such as Prince Dauntless the Drab in “Once Upon A Mattress” and Charlie Brown in “You’re A Good Man Charlie Brown.”

After Iowa Lakes, Wilbur attended the University of South Dakota. It was there he met his wife Synnora, and graduated with his Bachelor of Arts in Music Education.

He remained a counselor for the Reggie Schive Jazz Camp, returning to Iowa Lakes each summer. Upon graduation, he accepted a position as instrumental music instructor for Wagner Community Schools in Wagner, South Dakota, where he is currently teaching.

Wilbur has since also “graduated” from Jazz Camp, moving from a counselor to an educator teaching trombone lessons and director of one of the camp’s big bands.

“Without the support of my instructors at Iowa Lakes, I might have been in a career path that wasn’t right for me,” Wilbur said. “I’m very thankful for the opportunities Iowa Lakes offered me because even though I took a little longer to graduate since I switched majors a few more times than most students, I found my passion and lifelong career.”