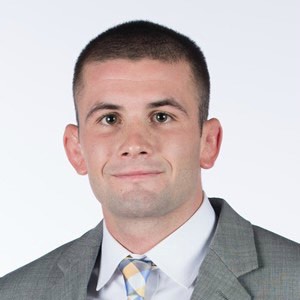 “We’re excited to have Sean as our head wrestling coach. His wrestling background is outstanding, with him wrestling at Michigan and the national tournament. He has also excelled as a coach at several Division 1 institutions. He has great command in the room and is technically as good as you can get. Sean cares about our student-athletes and will help them achieve their goals both on the mat and in the classroom. Anxious to see what levels Sean can take the program to,” shared Troy Larson, the Athletic Director at Iowa Lakes.

“I am honored to be hired as the new Head Wrestling Coach at Iowa Lakes Community College. I can’t thank Athletic Director Troy Larson enough for this opportunity. I’ve always dreamed of being a college head coach, and now I get to live my dream. I am thrilled to meet my staff and athletes and excited to see what we can do!” exclaimed Boyle.

Boyle wrestled at the University of Michigan from 2009-14. He earned his Bachelor of Science Degree in the School of Kinesiology, Physical Education, and Health from the University of Michigan in 2014. He was a National Wrestling Coaches Association (NWCA) All-Academic honoree for the Wolverines. Boyle went on to earn his Master’s Degree in Secondary Education, Physical Education & Health from UTC in 2016.

While at the University of Buffalo, Boyle assembled a class of 24 recruits to wrestle for the Bulls. The Bulls finished with a 12-5 record and then finished second at the Mid-American Conference (MAC) Championships, with two wrestlers winning MAC titles. Five wrestlers qualified for the National Collegiate Athletic Association (NCAA) Division I National Championships.

While at CSU Bakersfield, Boyle helped lead the Roadrunners to third-place finishes in the Pac-12 Conference 2017 and 2018. Additionally, the Roadrunners had five NCAA qualifiers in each of his two seasons, with a 2017 Pac-12 Champion at 125 lbs.