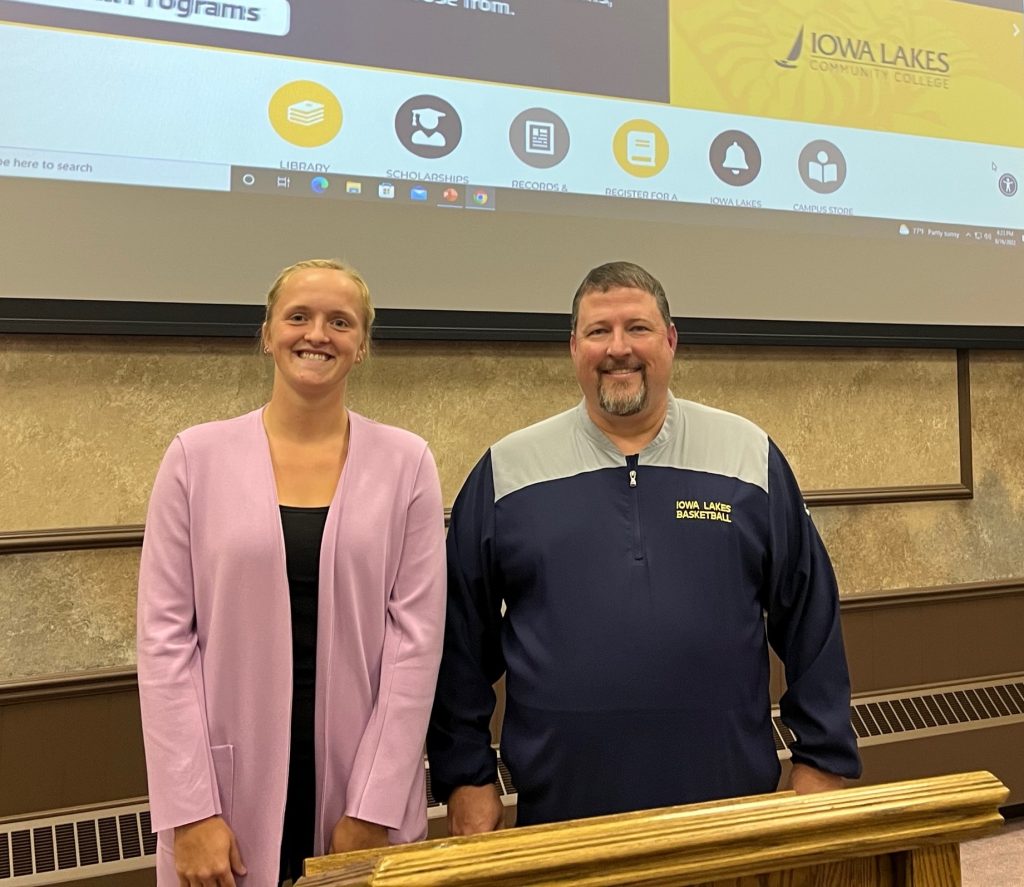 (Estherville, Iowa) The Iowa Lakes Community College Board of Trustees met Tuesday afternoon for their regularly scheduled board meeting in Estherville.

Julie Williams, Executive Dean of Students, introduced Troy Larson, Athletic Director and Head Men’s Basketball Coach. Larson has been employed at Iowa Lakes since 2007 and earned his Associate in Arts degree from Iowa Lakes Community College, a bachelor’s degree from Morningside College, and a master’s in business administration from the University of South Dakota.

“We are looking forward to this year’s competitive season and the addition of Women’s Wrestling for the Fall of 2023,” said Larson.

Women’s Wrestling is the most recent sport to be included in the competitive athletic offerings at Iowa Lakes. There are five other community colleges in Iowa offering Women’s Wrestling.

Larsen then introduced Iowa Lakes student-athlete Rachel Breck from Waseca, Minnesota. Breck was recruited to play women’s basketball but ultimately became a multi-sport athlete for the Lakers, participating in both volleyball and women’s basketball.

“I chose Iowa Lakes to continue my athletic career, initially with women’s basketball, but I was excited when I was able to be a part of two teams as a Laker,” said Breck.

Breck plans to graduate following Fall 2022 with an Associate in Arts degree in Business Administration and a Photography Diploma.

“When I came to Iowa Lakes, I was uncertain about what I wanted to do for a career, but I am so glad that I came here because I found the creativity and interest in photography that I never knew I had,” said Breck.

Beth Elman, Executive Director of Marketing, updated the Board on the Fall 2022 schedule and events happening on campus.

Elman shared, “We are excited for the upcoming academic year and look forward to welcoming students back on campus this weekend with move-in days. Classes begin on Tuesday, August 23, and there is still time for students to register.”

The Iowa Lakes Community College Board of Trustees will hold their next meeting on Tuesday, September 20, 2022, at 4:30 p.m. at the Administration Building, 19 South 7th Street, Estherville, Iowa. The Work Session will begin at 4:00 p.m.