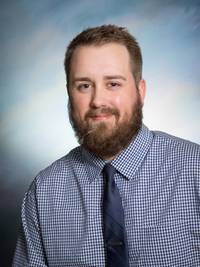 For the second consecutive year, Matt Heinrichs, an adjunct instructor in the Digital, Social and Broadcast Productions program at Iowa Lakes Community College, brought home more awards than any journalist in the state at an awards banquet held Friday, Feb. 3 in Des Moines.

In addition to teaching at Iowa Lakes, Heinrichs is also the Sports Editor of the Dickinson County News in Spirit Lake. He won seven Iowa Better Newspaper Contest awards at the 2018 Iowa Newspaper Association Convention and Trade Show.

“Matt Heinrichs’ columns have great emotion that comes from good scene setting, vignettes and dialogue,” one judge said. “His columns have clear focus and nice pacing from beginning to end.”

His award-winning video was part of his coverage of the 2016 Harris-Lake Park football team’s run to the UNI-Dome. The video featured interviews with coaches and players as well as photos from the championship game.

“A thorough video, packed with news and featuring a lot of layers and voices throughout,” one judge said.

The Dickinson County News won a total of 30 awards Friday night, was named the state’s best mid-sized weekly, and finished fifth among all newspapers in the state regardless of circulation size.

The Des Moines Register was named Newspaper of the Year for a fifth consecutive year and 13th time overall. The Sheldon Northwest Iowa REVIEW, the Carroll Daily Times Herald, the Cedar Rapids Gazette and the Dickinson County News rounded out the top five.