Iowa Lakes Community College is proud to announce the cast for the spring musical, “The 1940’s Radio Hour.”

The show is set on Dec. 21, 1942, in the studios of New York radio station WOV. It’s the final broadcast of the Mutual Manhattan Variety Cavalcade. World War II raging overseas has everyone on edge this particular Christmas season, making for good drama and lively performances. Songs and radio skits play out onstage as the show is being recorded to send to the troops.

“It’s a musical for people who don’t like musicals,” said Carol Ayres Stueven, one of the co-musical directors of the show. “It’s really more like a variety show and we have such incredible performers, it will definitely be a show you won’t want to miss.”

As the audience walks in, actors will be milling about in character, preparing for the radio production.

“The audience is part of the play from the moment they walk in,” Ayres Stueven said.

Those involved with the production say that despite the live band and skilled actors onstage, the appeal of the show is in nostalgia — even for those who weren’t alive at the time.

“The 1940’s Radio Hour” is just that: a glimpse into the successful operations of a radio show on a snowy winter night. It is not fraught with the characters’ personal drama, though there is some drama related to the production of the radio show itself. The production depicts the need for good family entertainment in challenging times. All in all, it is fun, funny and fanciful.

“When I think of Christmas, so much of the music I think of was all a product of that era —‘The Christmas Song (Chestnuts Roasting on an Open Fire),’ ‘White Christmas,’ ‘I’ll Be Home for Christmas.’ I think there’s tremendous nostalgic appeal to the show,” said Brett Fuelberth, co-musical director.

While the show may be set in 1942, the characters are recognizable even 75 years later as familiar types. There’s the Italian tough guy who is a smooth crooner, the bubble-headed singer with the squeaky voice, and the stressed-out manager who tries to keep the show together.

Characters are trying to plan their next steps after their program ends. Some have big dreams of stardom while at least one knows he’s off to fly a plane in the war.

Though the show is set at Christmas time, the band only plays a few holiday tunes, like the bittersweet “Have Yourself a Merry Little Christmas.”

“It’s a show that reminds you to be grateful for what you have,” Ayres Stueven said. “You can’t go through this show without smiling.”

Cast and crew
The 1940’s Radio Hour opens with Pops Bailey, played by Jim Kennedy, Okoboji, in the role of phone operator for the radio station. On the side, he’s a bookie using the station’s pay phone to take bets. He is an elderly man, adored by some characters and irritating to others.

Stanley, the station’s booth technician and handy-man, will be portrayed by Robert Noyes, an Iowa Lakes student from Estherville. This character is quiet but takes pride in his work as he supports the production of the radio show announcer and general manager, Clifton A. Feddington, played by Michael Nichols, an Iowa Lakes Spanish professor.

Lou Cohn, played by Nathan Strohman, an Iowa Lakes student from Spencer, is the stage manager for the radio show.

Johnny Cantone is the Dean Martin rat-pack wannabe set to be portrayed by Mark Lair, an Iowa Lakes alumnus from Terril. Cantone is a crooner in every sense, hitting notes that make the gals swoon. He references Sinatra and is quite the womanizer but his history with Ann Collier, played by Lorie Irwin, Estherville, is obvious. Collier is demur and quiet but when she steps up to the microphone, her voice will melt the heart, especially when she sings “Have Yourself a Merry Little Christmas.”

Neal Tilden, played by Mitchell Leifeld, an Iowa Lakes student from Cresco, is the comic in the group. This character is part of the commercials, chorus and WOV Call Sign. His solo “Blue Moon” is another classic song in this production.

Geneva Lee Browne, played by Serena Lynch, an Iowa Lakes alumna from Estherville, is the sultry blues singer who sings, “Black Coffee” and “That Old Black Magic.” She is quick-witted and confident.

Ginger Brooks, played by Jailene Graves, an Iowa Lakes student from Spencer, is a bubble-headed waitress. She sings “Blues in the Night” with the men’s group.

Wally Fergusson, the delivery boy, is played by Justin Christensen, an Estherville Lincoln Central student from Ringsted. The newcomer to the radio show, Connie Miller, played by Sarah Nehring, an Iowa Lakes student from Royal, gets to sing the snappy tune “Daddy” with the men’s group.

Mary O’Neal, played by Hannah Newton, and Betty English, played by Megan Ryan, both Iowa Lakes students from Estherville and Cresco respectively, offer their vocal talents to the songs and commercials.

B.J. Gibson, the Yale college student who wants to make it big, is played by Nicholas Adams, an Iowa Lakes student from Emmetsburg. He duets with Connie (Sarah Nehring) in the number “How About You.”

Biff Baker, a trumpet playing soldier shipping out the next day, is played by Lincoln Larsen, an Iowa Lakes student from Sioux City.

The Butterfield Sisters are a singing group brought on for a special appearance for this broadcast. They are Dorothy, played by Claire Funston; Donna, played by Isabel Nichols; and Delores, played by McKenzie Depyper. Eugene Buss, played by David Swanson, will be creating all the special effects for the show.

Rounding out the cast is Zoot Doubleman, leader of the Zoot Doubleman Orchestra played by Ayres Stueven, and pianist Fuelberth is the co-musical director.

True to form, there’s a live band in the studio, and members of the Iowa Lakes Jazz Band will punch out tunes like Glenn Miller’s “(I’ve Got a Gal in) Kalamazoo,” George and Ira Gershwin’s “Love Is Here to Stay” and the Andrews Sisters’ “Boogie Woogie Bugle Boy.” 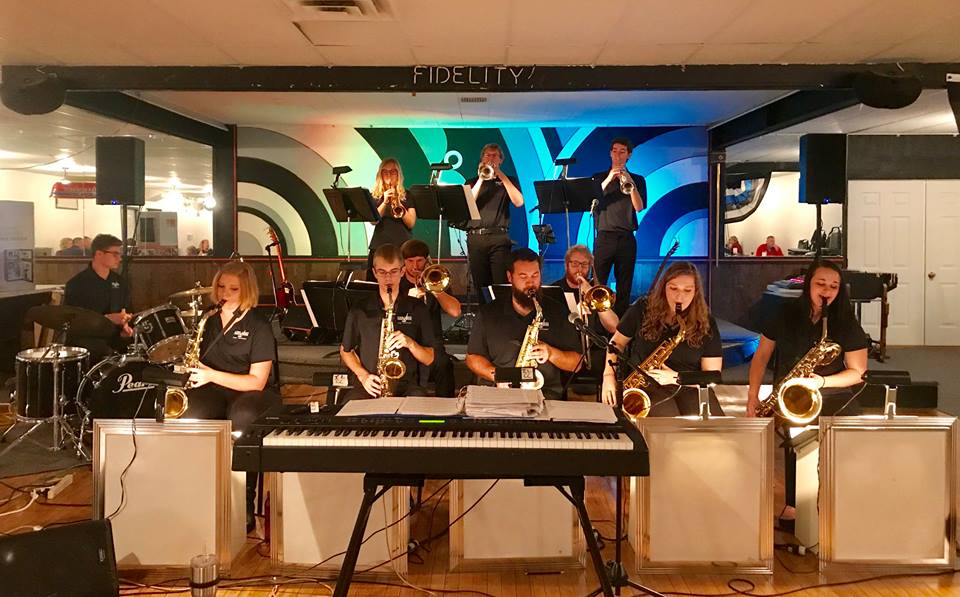 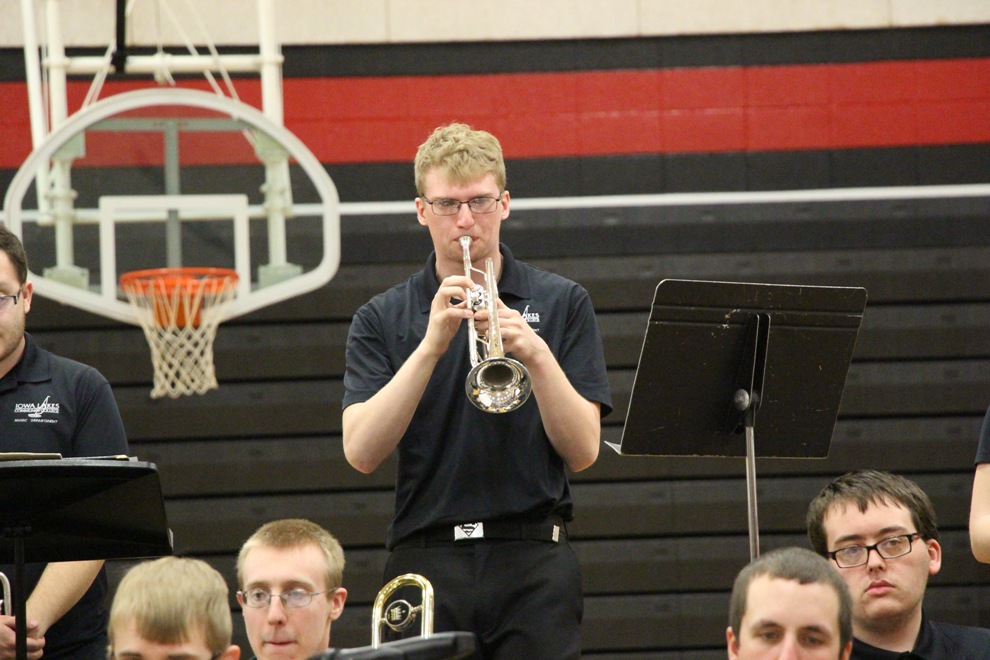 Iowa Lakes Community College music student Lincoln Larsen will portray trumpet player Biff Baker, a soldier shipping out the day after the final broadcast of the Mutual Manhattan Variety Cavalcade, in the upcoming performance of “The 1940’s Radio Hour.”