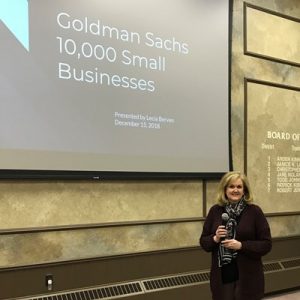 (Estherville, Iowa) The Iowa Lakes Community College Board of Trustees met Tuesday afternoon in Estherville for their regularly scheduled Board meeting. Tuesday’s meeting was the last on schedule for 2018.

Berven has been employed by Iowa Lakes Community College since1998, marking this year as her 20th anniversary with the institution. B

Following her introduction, Berven presented to the Iowa Lakes Board of Trustees about the Goldman Sachs 10,000 Small Businesses Program and announced that she had recently been selected as one of seven instructors that will teach.

“It is an honor to be a part of an economic development opportunity for small business owners. I am particularly excited about the opportunities available to the small business owners in our area, and I hope that they will take advantage of the expertise provided by the Goldman Sachs 10,000 Small Businesses initiative,” said Berven.

Berven also shared, “The Goldman Sachs 10,000 Small Businesses Program was launched nationally in 2009 and has provided $500 million in funding for the program. Business owners will learn how to grow revenue and grow their hiring while they receive practical business skills,” said Berven.

The program has partnered with Iowa’s community colleges and will be the first in the nation to deliver a statewide initiative. Iowa’s first cohort is scheduled for January 2019, with applications being accepted for the second cohort planned for April 2019.

“This program provides scholarship opportunities for areas of study that are considered to be high paying, high skilled and are in high demand. In addition to programs already identified, each of Iowa’s community colleges were allowed to include five more that are reflective of area needs,” said Leifeld.

Leifeld requested to include Aviation, Veterinary Technician, Ag Production, Environmental Studies, and Business Administration. The board approved including these programs. 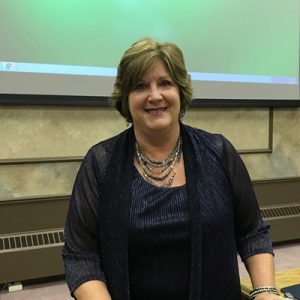 Additionally, Delaine Hiney, Executive Director of Facilities Management, shared that the College Farm underwent a 3rd party swine facility audit. This audit was requested by Tyson Foods and may be conducted at any swine facility that sells to their organization.

“The Iowa Lakes Community College Farm received a 94.9% out of 100% scoring during this audit. The average facility audit score is generally in the 70% range. This was an amazing finding and further demonstrates the exceptional quality of work completed by our instructors, staff, and students”, said Hiney.

Jolene Rogers, Executive Director of Community and Business Relations, provided the Board with an update on activities and various Foundation scholarship fundraising events that are planned for 2019.

Rogers provided donors with guidance on year-end giving. Donations are processed by postmark in accordance with IRS regulations.

“As we are in the season of gift-giving, the Iowa Lakes Foundation continues to accept donations,” Rogers said. “A gift of education is one that could change someone’s life forever.”
In other business, the Trustees received a Treasurers Report and a listing of monthly bills from the Chief Financial Officer, Jeff Soper.

The next meeting of the Iowa Lakes Board of Trustees will be on Tuesday, January 15, 2019, in Estherville.